Kempner is at the junction of U.S. Highway 190 and Ranch Road 2313, on the Atchison, Topeka and Santa Fe Railway and the Lampasas River in southeastern Lampasas County. It moved a number of times during its early years of development. It was first settled in the early 1850s, when a number of families named Pickett moved to the area, which became known as Pickett Valley. The majority of the settlers were land and slave owners of prominence until the Civil War. The community was also briefly known as Brummersville during 1865. The Pickett cemetery is still located slightly west of Kempner. Around 1854 Dan W. Taylor moved to the area with a large herd of cattle and built a store for his men on Taylor Creek, two miles from the present townsite. He was an influential man in the community and was often consulted to settle local legal differences. A post office named Taylor’s Creek was established in his store in 1873. After Taylor’s death the community was named after a local landowner named Slaughter. The Taylor’s Creek post office was discontinued in 1878, and that same year a post office named Slaughtersville was established.

In 1882 the Gulf, Colorado and Santa Fe Railway was built through the area, two miles from the Taylor store, and the community’s center finally became fixed when the post office was moved to a frame building near the railroad tracks and renamed Kempner after Harris Kempner, a Galveston merchant and director of the Gulf, Colorado and Santa Fe. The first postmaster at the new location was Johnnie Chance. The coming of the railroad caused the population to double. The first rock store in town was erected by Jo Brown. By 1884 Kempner had two steam gristmills and cotton gins, a church, a district school, and telegraph service, and by 1896 a hotel had been built. Telephone service was available by 1914. In 1918 a Mr. Rancier organized a bank in Kempner; this establishment later failed, and the stockholders lost their accounts. 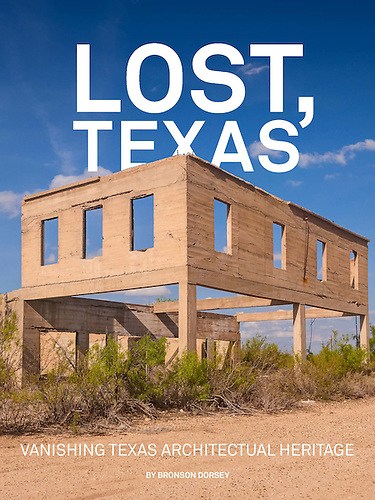 This is the first post I’ve made that doesn’t include a photograph and isn’t about some small Texas town.  But I thought I’d let you know why there haven’t been many posts lately and when you can expect to see more.

As many of you know, I’ve traveled around Texas over the past four-plus years uncovering (sometimes literally) and photographing beautiful abandoned buildings.  For the last year, I’ve been working on the design of a book and trying to find a publisher.  As of July, I have a potential deal with a large academic press (don’t want to say who for fear of jinxing it) pending the submission of final copy and photographs and their review and approval.  I have another dozen or so sites to photograph this Fall and a lot of copy to finalize before I can submit. So if postings seem sparse, that’s the reason.  I hope to finish all of this by the end of January.

Thank all of you who follow Lost, Texas and for your many comments.  I really enjoy hearing about personal connections with the places I’ve photographed.  Keep ’em coming!

Salem must have been a popular name in the late 1800s, as there are seventeen of them listed in the Handbook of Texas.  This Salem was a farming community in southern Bastrop County south of Rosanky and two miles from Jeddo.  Originally known as St. Philips Colony, Salem was populated by blacks freed during Reconstruction.  Since it was paired with the white community of Jeddo, it’s uncertain how many people lived in Salem.  St. Philip’s Church (denomination unknown) and a number of houses existed when the school was built.

The Salem School was two-room schoolhouse and had one teacher for the twenty-nine black students when it opened in the early 1880s.  In 1907, the Salem School, with over fifty students was merged with the Jeddo school district and later with the Smithville ISD.  All that remains today are the ruins of the school and the old cemetery. 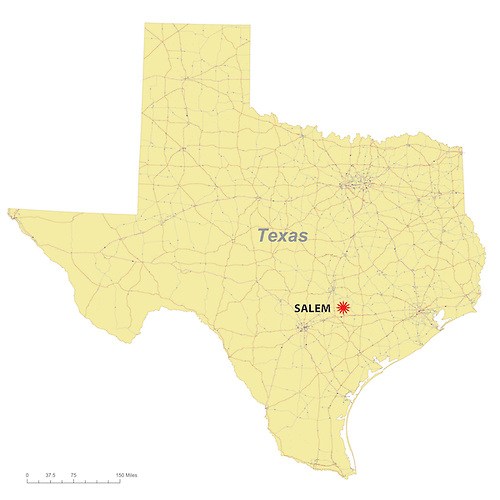 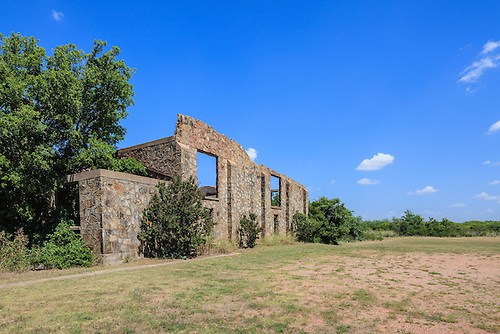 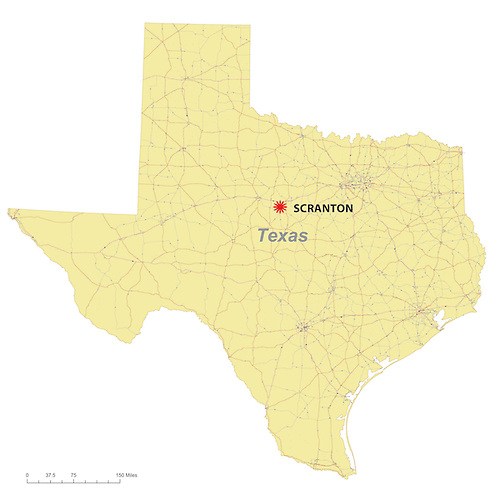 Where Post, Texas sits today was cereal manufacturer Charles W. Post’s second location for his proposed model town (see Close City).  It was the second only due to its geographical location near the center of Garza County – the state legislature’s preferred location for the seats of county government.  Post is situated just below the rim of the Caprock Escarpment of the Llano Estacado, which forms the southeastern boundary of the Great Plains.  This area of Texas had long been the buffalo-hunting grounds of the Plains Indian tribes.  The Indian’s removal by the U. S. Army in the 1870s allowed cattle ranchers to safely pasture their herds.  For thirty years after its creation by the state legislature, citizens in Garza County were vastly outnumbered by livestock.

In 1906 C. W. Post began purchasing ranches in Garza and Lynn counties, ultimately totaling 225,000 acres, most of which was subdivided into 160-acre parcels.  Post platted a townsite in 1907 and began construction his social experiment, the town of Post City.  He established the Double U. Company to manage construction of the town as well as its promotion and lot sales.  Part of the effort to attract land purchasers included lining the streets with trees and prohibiting alcoholic beverages and prostitution.  Post City’s first post office was housed in a tent, as were many of the town’s businesses while they waited for buildings to be completed. In addition to houses, the Double U. Company built the Algerita Hotel, cotton gin, and a textile manufacturing plant – Postex Cotton Mills.  By 1910, when the Santa Fe Railroad arrived, a bank and a school had been built and the town’s first newspaper had started publication – the Post City Post.

Another experimental effort of C. W. Post to increase the value of his land was rainmaking.  Explosives, attached to kites that were tethered to towers atop the escarpment, were detonated in the atmosphere at timed intervals.  And while rainfall frequently occurred after the explosions, it was never determined whether the explosions caused the rain or not.

The town of Post, Texas – with a population of 1,000 people – was incorporated in 1914, which was also the year that Charles W. Post died.  By 1916, after an extensive real estate campaign, Post and the surrounding area contained approximately 3,000 inhabitants and 14 private corporations which together held over 1.2 million dollars in capital stock.  That year the town, with financial support from Post’s estate, made an unsuccessful bid to become the site of West Texas Agricultural and Mechanical College, which would later become Texas Tech University.  The town continued to grow, even through the Great Depression and Dust Bowl years.  Postex Cotton Mills was sold to Ely and Walker Dry Goods Company of St. Louis in 1945.  At the time of its sale, it employed 375 workers who produced over six million yards of cloth each year.  The mill, now owned by Burlington Industries, has remained the town’s largest employer.

Santa Fe Railroad Depot – This was one of four stations in Texas designed by Kansas City architect Louis Curtiss between 1909 and 1911.  Reinforced concrete was used for the structure and the architectural ornamentation.  The depot has been restored by the Post Chamber of Commerce. 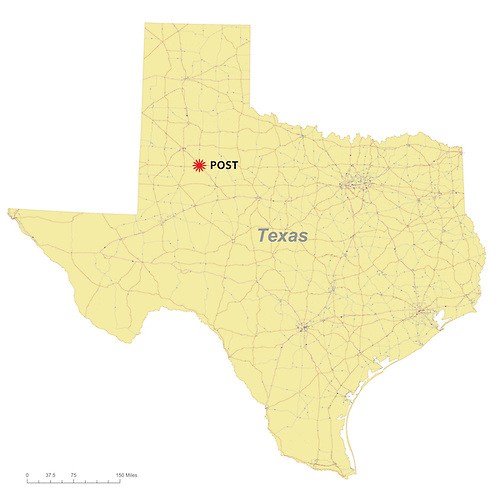