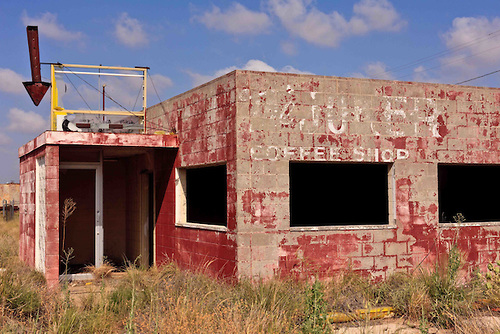 There’s not much left in what was once Penwell, TX - just abandoned oilfield tanks and scrap metal, a welding shop, and the shell of The Joker Coffee Shop (above).

Penwell is a prototypical 1920s West Texas oil town.  It sprang up quickly and disappeared almost as fast.  The discovery of the Penwell-Jordan oil field occurred when the R. R. Penn Kloh-Rumsey No. 1, came in on October 7, 1929.  J. H. Penn, who drilled that well was a well-known oil man in west Texas.  Following his discovery, the town of Penwell was laid out within a month.  The town appears to have reached its peak in the early 1930s.  While exact population figures are hard to come by - between 200 and 3,000 depending upon the source - it is known that Penwell had several lumber yards, rooming houses, a doctor’s office, filling stations, two or three clothing stores, two hotels,  a drugstore, a barbershop, a pool hall, a dance hall, and a paper, the Penwell News.  For a brief time the town had a school, before students transferred to Odessa.  Like so many other West Texas oilfield towns, when drilling activity declined workers migrated to where there was work.  By 1980 there were still an estimated seventy-five hardy souls in Penwell supported by a post office, filling station, welding shop, and a beer store.

I have not found specific information about The Joker Coffee Shop.  I’d like to know who built and operated it, when it was built, and when it ceased operation.  I’m sure there are tales to be told about the place. 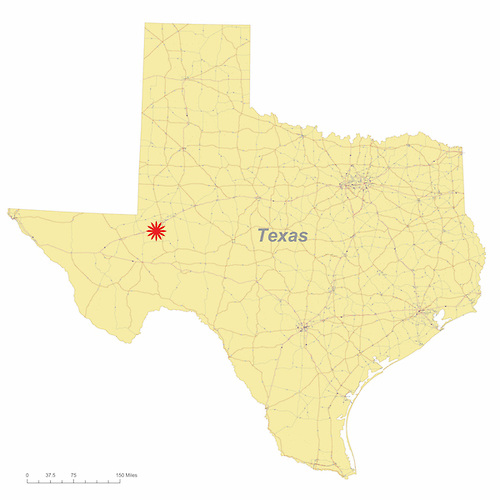