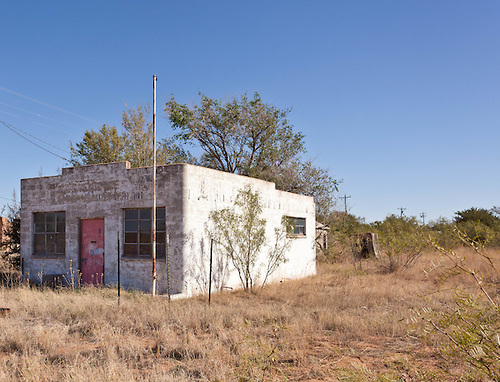 It’s impossible to see Tarzan on the Texas map and not drive there.  The name conjures up images that no one place could ever live up to, but I had to check anyway.  And while the town didn’t match the images in my imagination, it provided a Lost, Texas gem - The Little Dutchman, an abandoned store that was operating in the old Tarzan post office building as late as 1987 according to the Paris News. The building’s design looks to be Moderne, which would be consistent with the time frame in which it was built.

J. B. McNerlin was the first settler in the area, in the midst of the huge C. C. Slaughter, John Scarbauer, and Frank Orson Ranches.  In 1925 a two-room school was built, and soon after, Tant Lindsay built a store which, along with the school, formed the center of the farming and ranching community.  In 1927 Lindsay submitted a list of possible town names to the post office department.  Tant submitted a succession of suggested names for the town, when the post office was approved. Yet, most annoyingly, the postal department would veto each r10mination for one reason or another.  Finally, the exasperated Lindsay jotted down “15 or 20″ names.  He picked them at random from objects in the store, including a Tarzan book he happened to be reading.  He wrote to Washington: “We don’t Give a damn what you call this town.  Stop this dilly· dallying around.  We want some mail.  Take your choice from this list.”

Washington’s choice was Tarzan AND Lindsay was named the first postmaster.  Both Baptist and Church of Christ congregations met in the schoolhouse until they built their own buildings, the Baptists in 1937 and the Church of Christ after World War II.  The first gin in Tarzan, built in 1932, burned just four years later.  The turning point for the town came around 1938, when it was learned that a highway was to be built from Big Spring to Andrews and would pass through Tarzan.  J. T. Glaze promptly built a combination grocery and gas station.  After World War II local farmers organized the Tarzan Marketing Association.  The discovery of oil in Martin County in the 1950s led to the establishment of the Tarzan Hot Oil Company; oil production remains a major industry, and oil wells dot the surrounding area.  Throughout the postwar years Tarzan has served as an entry point into Martin County for Mexican braceros, seasonal workers usually employed in the cotton fields. 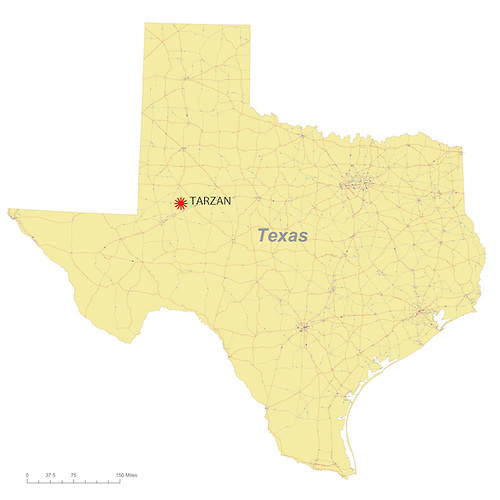