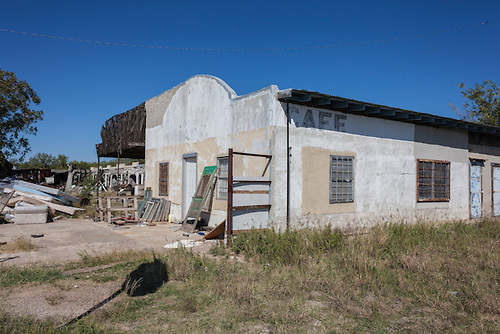 Carlsbad, TX has often been called Sanatorium due to its proximity to a tuberculosis sanatorium built on nearby land in 1911.  No doubt the fine citizens of Carlsbad much preferred the name they chose.  The cafe and the associated motor court pictured above were probably part of the town of Carlsbad although it’d difficult to discern the town limits.

Carlsbad began in 1907 when T. J. Clegg, Ed Perry, and others organized the Concho Land Company and purchased the 60,000-acre Hughes Ranch.  They divided the land into lots, laid out a townsite, built a hotel, named the town Hughes, and advertised free land to anyone who purchased a farm tract.  Within two years the land company had attracted a population of 600. 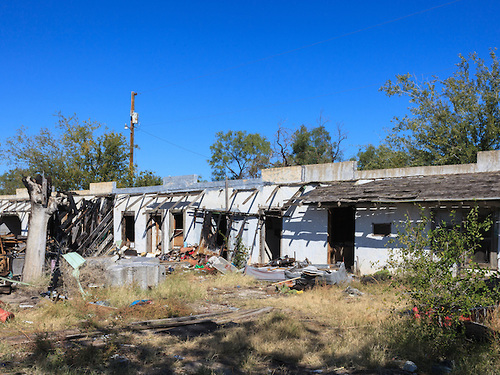 Growth was stimulated after the drilling of a deep well revealed medicinal properties in the local water; a bathhouse and efforts to advertise the town as a health resort resulted.  The community was required to choose a new name for a post office in 1908.  Residents selected Karlsbad, after a spa in Bohemia.   The Hughes Headlight, first published in 1908, was renamed the Carlsbad Headlight.  Around 1910 the Panhandle and Santa Fe Railway established a spur to Carlsbad, but a three-year drought decimated the community and most residents moved away.  By 1914 the settlement was reduced to 200 residents and a general store.  The population declined to 150 by 1925, then rose to 400 by 1932, when the community had eleven businesses.  The local school had four teachers in 1931 and an enrollment of eighty-four in 1933.  The Great Depression reduced the population to 150 by 1934, but growth resumed, and by 1944 the population reached a high of 700.  State highway maps in 1936 showed three churches, a post office, two stores, and scattered dwellings at the townsite on the Gulf, Colorado, and Santa Fe tracks, near a mining operation.  After World War II the Carlsbad freight station served a local pipe line and cattle shippers; the McKnight State Sanatorium was established in 1950 on acreage to the north donated by the land company.

In 1911 both houses passed a bill creating two colonies-one for advanced and one for early cases-dedicated to the treatment and education of people infected with TB.   Although plans for the former were abandoned, 330 acres was purchased near Carlsbad for the location of the Anti-Tuberculosis Colony No. 1.  The first institution of its kind in Texas, the colony provided the
isolation to calm the fears of the public, as well as rest and clean air, the only known cure for TB sufferers.  Admission was restricted to patients between the ages of six and sixty for a period not to exceed six months.  The fifty-seven-bed facility opened with a barbecue and celebration on July 4, 1912.  Bascom Lynn, who commuted from San Angelo, was the first superintendent. In 1913 the facility was renamed the State Tuberculosis Sanatorium, and on January 1, 1914, Governor Oscar B. Colquitt appointed Joseph B. McKnight resident superintendent.  Under McKnight’s leadership the sanatorium expanded for the next thirty-five years. 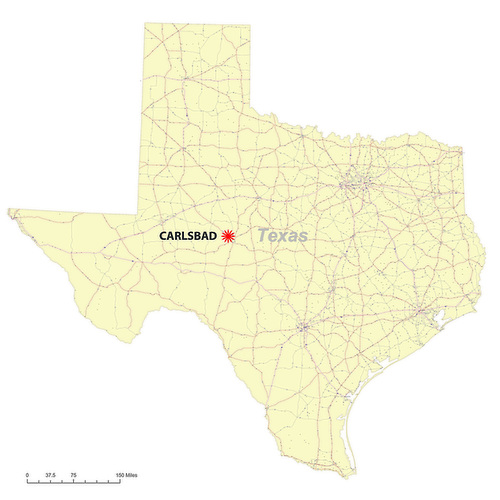