Flint, at the junction of Farm roads 2868, 346, and 2493, four miles north of Bullard in Smith County, was originally part of the Tomás Quevedo survey.  The site, named for local landowner Robert P. Flynt, became a stop on the Kansas and Gulf Short Line Railroad in 1882.  The post office began operations in 1887 as Flint, when postmaster Charles B. Brown misspelled the name on application forms.  Robert Flynt succeeded him the next year. In 1890 the settlement had a general store, three cotton gins, a physician, and a population of twenty-five. In 1892 the Etna Methodist Church was moved there. By 1902 some 100 local families were engaged in truck farming.  That year they shipped eighty-five railroad cars of tomatoes, as well as large amounts of cabbage, cantaloupes, and peaches.  The town supported a blacksmith shop, a telephone exchange, a telegraph service, and the C. B. Rather and A. M. Campbell mercantile companies.  The local gin and gristmill shipped 750 to 1,000 bales of cotton each year.  Flint also had Methodist and Baptist churches.  Records for 1903 showed two schools, one with three teachers and 147 white students and the other with two teachers and eighty-one black students.

By 1914 local farmers shipped record amounts of nursery stock, fruit, and tomatoes from Flint. That year the population peaked at 450.  The town had six general stores, a bank, and a newspaper, the Flint Weekly Reader.  During the 1920s the original frame school building was torn down and replaced with a two-story brick structure where six teachers taught grades one through ten.  There were five businesses, a physician, and a justice of the peace court.  By 1925 the population had stabilized at 200.  In 1936 a Flint school with seven teachers had 203 white pupils, and a two-teacher facility had fifty-one black students.  The Great Depression greatly injured the business of the area.  After 1950 the population remained around 150.  By 1952 the Flint Independent School District had been established, but it was later consolidated into the Tyler Independent School District.  Maps showed two churches and a cemetery at Flint in 1973, when the old school was in use as a community center.  In 1989 an incredible thirty-seven businesses and a post office were reported.  In 1990 the population was still recorded as 150, but in 2000 it had increased to 700. 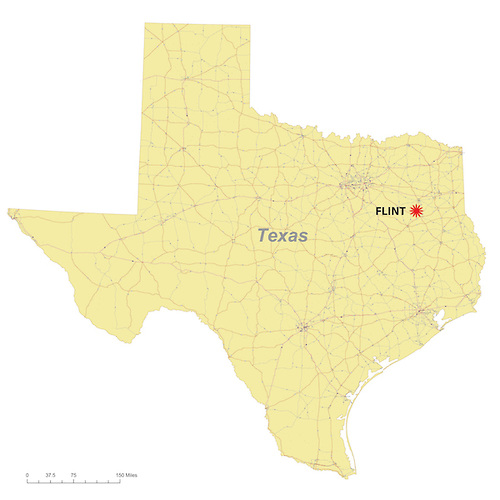