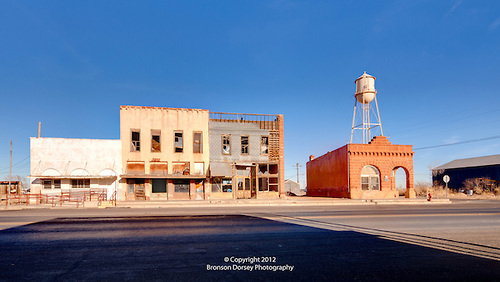 It’s not the Barstow made famous in the song Route 66.  Nonetheless, it made its mark on the history of West Texas.   Barstow is located in southwest Ward County about five miles east of Pecos on U.S. Highway 80.

The town was named for George E. Barstow, a Rhode Island land promoter who established it.  Barstow, the man, was of the world’s leading experts on irrigation.  He became interested in the Pecos valley in Texas after the state legislature passed an act in March 1889 to encourage the development of irrigation in West Texas.  The Pioneer Canal Company, with Barstow as treasurer, was chartered on July 6, 1889.  On September 30, 1889, Pioneer took over the Ward County Irrigation Company.  Barstow served as president of at least one of the Pioneer Canal Company’s later incarnations, the Pecos Valley Land and Irrigation Company.  An ad for the latter company, with a picture of Barstow as president, appeared in a 1909 issue of Cosmopolitan.

In 1891 Barstow joined other land developers in a project to promote a town on the Texas and Pacific Railway in western Ward County.  The townsite, laid out in 1891, was deeded by Mr. and Mrs. B. K. Brant and O. F. Brant to the Barstow Improvement Company in 1892.  Disagreement surfaced early over a name for the town, but by 1895 the community had taken the name of Barstow.  Barstow himself moved to Barstow in 1904 from New York City.  A post office established shortly after the town was organized.  That same year George E. Barstow formed the Barstow Improvement Company to promote the sale of land irrigated by the Pecos River.   He constructed irrigation canals and a dam and brought trainloads of prospective settlers to the town in land promotions.   The farms around Barstow grew grapes, peaches, pears, and melons.  In 1904 the Barstow Irrigation Company won a silver medal for grapes at the World’s Fair.  The same year an earthen dam on the rain-swollen Pecos River burst, and the resulting flood waters raised soil salinity levels, thus ruining many of the farms.  In 1907 and 1910 serious droughts plagued Barstow farmers.  Vineyards and orchards began to decline in 1911, and by 1918 farming ceased.

Barstow became the county seat when Ward County was organized in 1892.  A red sandstone courthouse was constructed in 1893.  By 1900 Barstow had a population of 1,103.  In 1914 the community had three churches, a bank, a hotel, an opera house, and a weekly newspaper, the West Texas Journal.  Two years later a power plant was built to generate electricity.  The population fell from 1,219 in 1910 to an estimated 490 in 1925.  In June 1938, after the discovery of oil in Winkler County and eastern Ward County, Monahans replaced Barstow as the county seat of Ward County.  Unfortunately, the beautiful sandstone courthouse was razed in the 1950s.  An old photo of the courthouse can be seen at TexasEscapes.com (link below).