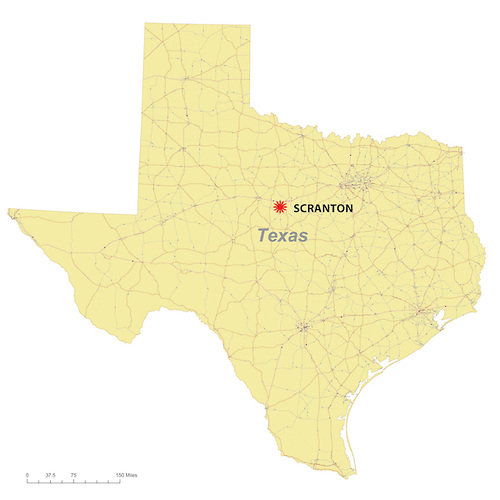 One of the first settlements in Grayson County was established by immigrants from Kentucky around 1850 three miles east of the current town of Whitewright, in the middle of the state’s richest farmland.  Kentucky Town received its official designation when a post office was established in June 1954.  The town – located along stage and freight lines from Shreveport and Jefferson – grew and prospered until the mid-1870s, when the Texas and Pacific Railway bypassed the town.  In the early 1870s, New York investor William Whitewright, Jr. had purchased a large tract of land located in the path the expanding Missouri, Kansas and Texas Railroad.  By 1978, Whitewright’s land had been surveyed as a townsite and his two agents, Tennessean James H. Reeves and Kentuckian James M. Batsell, were selling lots in the new community.  Due to its rail connection, Whitewright attracted settlers and businesses. 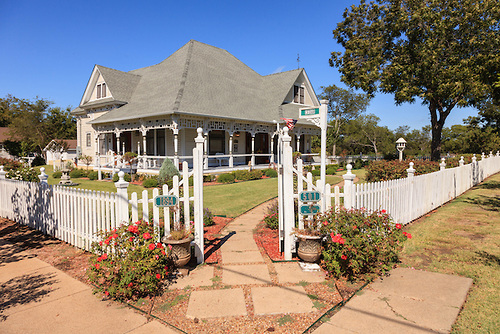 By 1888, Whitewright had become an incorporated town and center for cotton production.  The town had a newspaper, a post office, several businesses – mercantile stores, hotels, a bank and cotton gins – a public school and Grayson College.  At the beginning of the 20th century, Whitewright’s population was over 1,800 and continuing to grow.  A branch of the Cotton Belt Railroad from Commerce to Sherman established a station in Whitewright in the 1920s, enhancing its status as a marketing and commercial center for producers of cotton, wheat, and corn.

Kay Kimbell grew up and attended public school in Whitewright, dropping out in the 8th grade to work in a grain mill.  He founded the Beatrice Milling Company in Whitewright in the early 1900s.  The company grew into Kimbell Milling Company, which became the center of a diverse business organization.  When he died, he owned or served as a director of over 70 corporations that included wholesale grocery, insurance, feed and flour mills and a grocery chain.  Kimbell was an avid art collector and established the Kimbell Art Foundation in Fort Worth in 1935.  He left his fortune to the foundation with instructions to build a first-class art museum in Fort Worth. 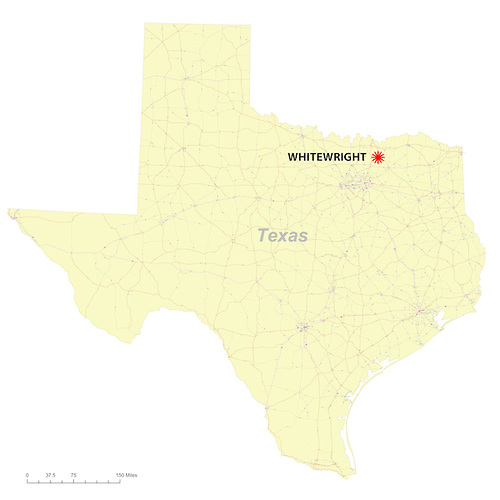 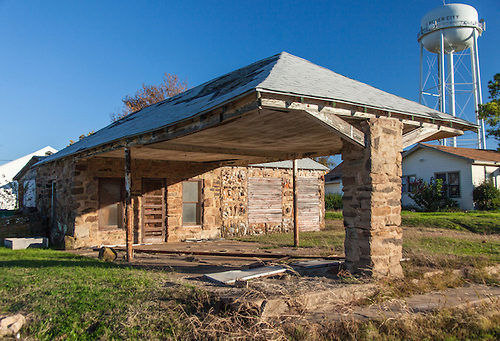 Archer City is twenty-five miles southwest of Wichita Falls in the center of Archer County, of which it is the seat.  It was named for Branch Tanner Archer, a leading figure in the Texas Revolution and Republic of Texas.  The county was established and Archer City designated county seat by the state legislature in 1858, but the county was not organized until after the removal of the Kiowas and Comanches from the area. The townsite was originally surveyed in 1876 and was intended to lie on the projected paths of three railroad lines—the Fort Worth and Denver, the Houston and Texas Central, and the Red River and Rio Grande.  A local post office opened in 1878, and in about 1879 C. B. Hutto settled nearby and platted the town; he donated land for a town square, a lot for a county jail, and lots for the construction of Protestant churches.  He also donated a “frameless wooden building” to be used as a county courthouse.

Archer County’s first church, the First Baptist Church, was organized in the town in 1880 with eight members meeting in a building intended as a saloon.  The town soon after voted to ban the sale of alcoholic beverages, so the building continued to serve as a church; from 1881 to 1886 it was the first school building.  In 1884 the estimated population of Archer City was 150, and the principal business was county administration. Cotton was the most important shipped product, although the railroad had not arrived yet.

By 1890 the population was an estimated 250, and a weekly newspaper was being published.  The town now had daily mail and a daily stage to Wichita Falls.  In 1892 the post office name, Archer, was changed to match the town’s name.  An ornate stone courthouse had been built, two more churches had been organized, and a brickyard and a hotel had opened.  By 1900 the town had a bank and three livestock dealers, although cotton remained the staple of outside trade.  The first oil well in the county, twelve miles from town, began producing in March 1912.  Although it never produced great amounts it continued in operation at least into the late 1970s.  By 1914 Archer City had two railroads, the Wichita Falls and Southern and the Southwestern, and the population was estimated at 825.  Archer City was incorporated in 1925 and continued to grow as more oil wells were opened nearby. By late 1926 there were seventeen fields with 411 wells within thirteen miles of Archer City.  The largest field by far was Oldham, with 103 wells. Archer City was also a milling and market point for wheat and other grains and had about seventy businesses, including three banks.

By 1930 the town’s population was 1,512, and the county hospital had been built there.  The county’s fiftieth-anniversary celebration had been held in Archer City the year before, a year early in honor of the opening of the county’s first highway, State Highway 79.  By the 1930s researchers from Harvard University were collecting fossils in Archer County.  Two of the best fossil pits are near Archer City, and from one of these came a fossil that was named Archeria in honor of the county.  Archer City continued growing slowly despite the loss of some businesses during World War II.  The population peaked at 2,025 in 1970; the number of businesses had begun falling off in the 1960s.  In Larry McMurtry’s novel The Last Picture Show (1966), which derives its setting from Archer City, the closing of the Royal Theater is a major symbol. McMurtry is a native of Archer County.  In 1986 the town had a post office, forty-nine businesses including a bank, and a population of 1,862. By 2000 the population was 1,848 with eighty-six businesses. 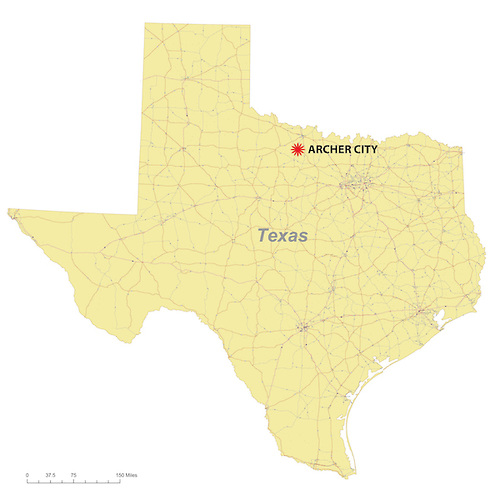 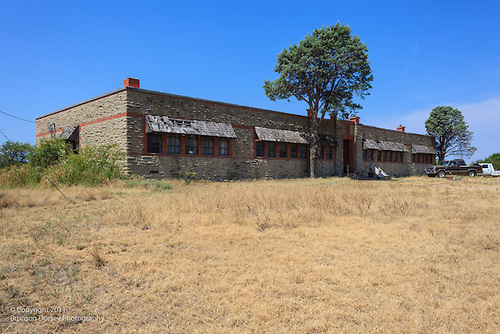 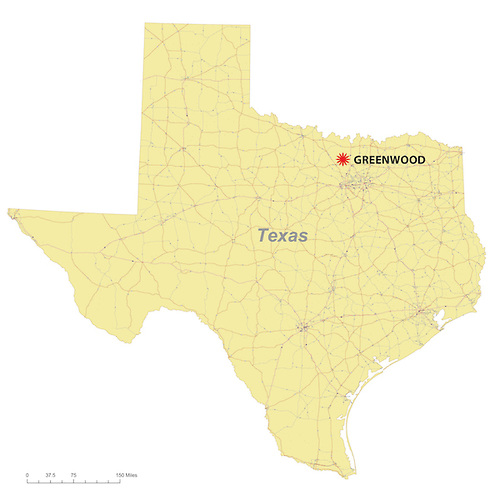 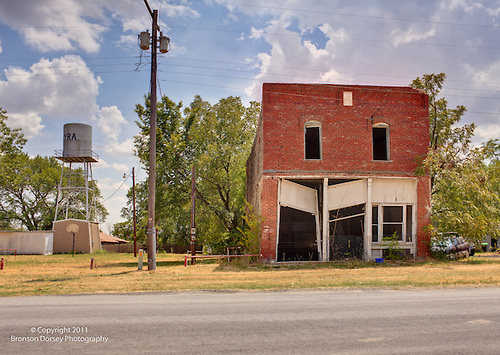 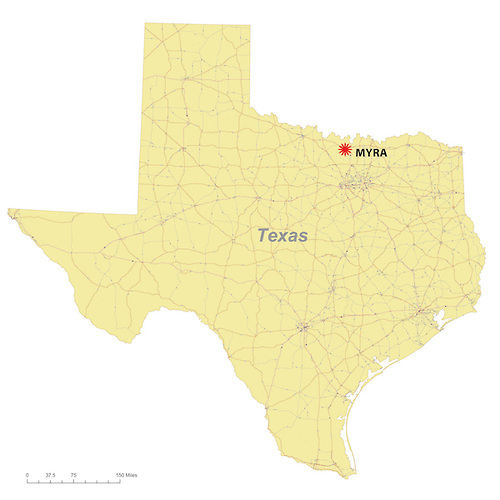