In 1911 the Santa Fe Railroad opened a passenger and freight depot in Snyder – one of four Santa Fe depots designed by Kansas City architect, Louis S. Curtis, in the Art Moderne style. The identical depots were built within two years of each other in Sweetwater, Post and Lubbock. The buildings’ reinforced-concrete frame featured an exterior of white, glazed terracotta in various shapes.

Glazed terracotta, used as an architectural material for centuries, provided designers a modular, easily-repeated and inexpensive method to clad and adorn their buildings in a variety of styles and with an almost-unlimited color palette. Louis Curtis used terracotta quite effectively on the four Santa Fe depots. The building corners were built in multiple planes with curved profiles, square corners and other adornment. Even the town names and Santa Fe Railroad logos were terracotta.

Of the four depots designed by Curtis, only two are standing – the Snyder depot and one it Post, Texas, which has been restored and is used by the Post Chamber of Commerce. So it is disappointing to report that efforts to relocate and restore the Snyder depot have apparently failed. The building’s owner, Burlington Northern Santa Fe, needs the property for another use and plans to raze the depot. 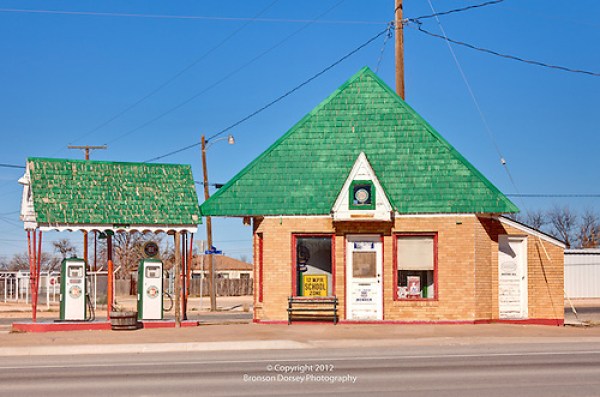 I couldn’t believe my eyes when I drove by this old, restored Sinclair Gas Station.  Not only is it one of the quaintest gas stations I’ve ever seen, it dredged up a lot of old memories from my childhood when my Dad worked for Sinclair Oil & Gas.  Snyder is the county seat of Scurry County and sits at the junction of U.S. highways 84 and 180, eighty-seven miles southeast of Lubbock.

Snyder had its beginnings in 1878, when a buffalo hunter and trader, William Henry (Pete) Snyder, a native of Pennsylvania, built a trading post on the banks of Deep Creek.  Other hunters were attracted to the post, and a colony of buffalo-hide dwellings grew up around it.  These dwellings, as well as the occasionally dubious character of their inhabitants, gave the town its first names, “Hide Town,” and “Robber’s Roost.”  In 1882 Snyder drew up a town plan and invited immigration.  The first public school was established sometime that year.  In 1884, when Scurry County was organized, Synder’s settlement was chosen as the county seat.  By 1892 Snyder had a population of 600, two churches, two banks, a steam gin, a gristmill, and two weekly newspapers, the Scurry County Citizen and the Coming West.  Construction began on the Roscoe, Snyder and Pacific Railway in 1907, the same year that Snyder’s city charter was granted.  In 1911 the Atchison, Topeka and Santa Fe Railway laid tracks through Snyder.

By 1910, the first year census figures were recorded for Snyder, the town had a population of 2,514.  A women’s literary circle, the Altrurian Club, was formed in 1908, and eventually spawned eight more study clubs.  While the public school system was still developing, these clubs performed significant educational functions; later their focus changed to public service.  Snyder remained a farming and ranching community until 1948, when oil was discovered on the Canyon Reef formation north of town.  Within a year the population jumped from around 4,000 to over 12,000, a tent and trailer city sprang up on the town’s northern edge.  The boom was over by late 1951, and the population, which had peaked at around 16,000, stabilized at 11,000. Snyder was left an ugly city with many vacant or half-completed buildings.  During the 1960s city officials began refurbishing, and in 1964 a long-range planning committee improved opportunities for low-income citizens.  By 1968 in a contest cosponsored by the National Municipal League and Look Magazine, the city was named one of only eleven All-American cities in the United States.  Large industries located in Snyder during the late 1960s and the early 1970s, and its population began to rise again.

By 1960 Snyder had seven elementary schools, two junior highs, and a high school.  In 1969 a long string of failed attempts finally culminated in the approval of a proposal for a junior college, and in the fall of 1971 the new Western Texas College opened with 649 students.  In 1986 enrollment was over 1,000.  The Diamond M Foundation was established in 1950 by oilman and rancher Clarence T. McLaughlin to collect works of American artists.  The Diamond M Museum opened in 1964 and five years later doubled in size.  In1990 it housed over eighty bronzes and 200 paintings, including works by Andrew Wyeth and Peter Hurd, and is considered among the best collections in Texas.  In 1980 Snyder had a population of 12,705.  The Snyder Daily News has been published since 1950.  Oil has remained important to the city’s economy.  In the late 1960s Scurry County became the leading oil-producing county in Texas as the result of a locally developed method of injecting carbon dioxide into the formation to increase the pressure and thereby increase the yield.  In 1973 Scurry oil companies recovered their billionth barrel of oil. 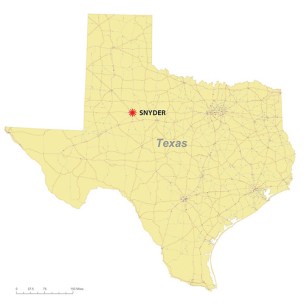