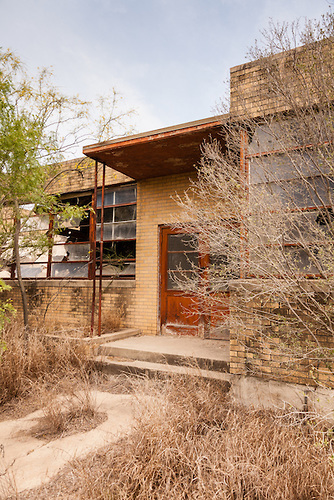 Driving on State Highway 97 east of Cotulla, TX there is nothing to identify what was the town of Fowlerton, other than a non-descript post office, a few mobile homes, and the standard highway city-limits sign.  Once upon a time though, it was a thriving town of 2,000 people.  On my recent visit, I was able to locate the remains of the old school (above) and a small church.  The school building has elements of the early International Style – specifically the corner window, the unadorned brick wall, and the thin porch roof supported by equally thin columns.  Given the more typical rural vernacular architecture of that time, this school would have been seen a very modern.

The Fowler Brothers Land Company (James and Charles) founded and developed the town in the early twentieth century in an ambitious attempt to develop a 100,000-acre tract that had once belonged to the Dull Ranch. They induced the San Antonio, Uvalde and Gulf Railway to extend its lines into the planned town, built two dams to provide water for irrigation and a new hotel, and laid 200 miles of public roads. They also built a cotton gin, installed an expensive water system, and conducted an aggressive advertising campaign to attract settlers and investors.

The land surrounding the townsite was divided into tracts of ten to 160 acres; for $25 dollars down and $10 a month an aspiring farmer could buy farmland and a receive a complimentary town lot. Land seekers (some called them “land suckers”) responded by moving to Fowlerton by the hundreds. By October 1911, when the SAU&G made its first trip into Fowlerton, the town already had two hotels, three general stores, a bank, twenty-five miles of streets, a telephone system, and 1,200 residents. By 1914 Fowlerton’s population was estimated at 2,000, and that year the town became the home of a summer normal school.

After 1917, however, the town rapidly declined; most of the farmers had suffered financial reverses due to a draught, low commodity prices, and marketing problems. Meanwhile, the Fowler brothers were targeted by a number of lawsuits accusing them of fraudulent marketing practices. The town thereafter “literally seemed to fall apart,” according to a former resident. By 1925 Fowlerton’s population had dropped to 600, and by 1931 only six businesses were reported there. By 1949 the community had 300 residents and four businesses and by 1964 200 people and two businesses. In 1972 the population was 100. In 1986 one newspaper called Fowlerton a “near-ghost town.” 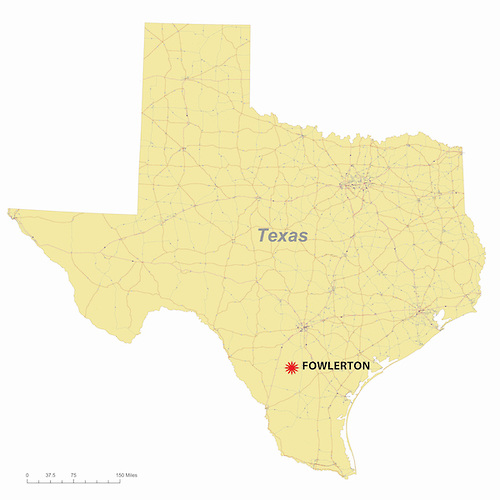