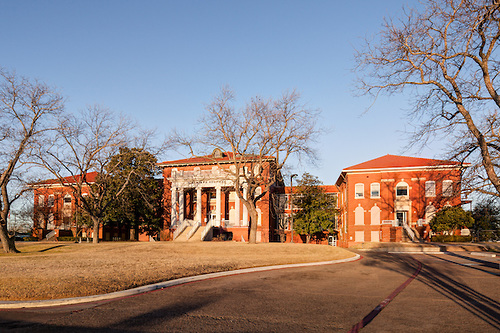 In previous posts, I have generally started the discussion at the town or regional level before discussing particular buildings.  However, for this post, I am focusing entirely on a building rather than the city where it is located.  The Santa Fe Railroad Hospital was unique because it was one of very few hospitals built by Texas railroads specifically for their employee’s benefit.  Railroad work was dangerous and injuries frequent.  Medical care for railroad workers, scattered across the state, was scarce and rudimentary.  The Gulf, Colorado and Santa Fe Railway decided it would be better for their employees and the railroad’s operations if injured workers could be brought to a then-state-of-the-art hospital for treatment of their injuries.

The Santa Fe Hospital opened in June 1891 on South Twenty-Fifth Street in Temple.  The hospital was operated by the Gulf, Colorado and Santa Fe Hospital Association, formed by Galveston businessmen who owned the Gulf, Colorado and Santa Fe Railway.  The Santa Fe was among the first railroads to adopt a system-wide prepaid hospitalization and pension plan.  Before 1891 railway workers were treated at St. Mary’s Hospital in Galveston, but rail officials established a hospital in Temple because of its central location in the railway system.  In 1889 three Temple city officials bought ten acres and in March 1891 deeded it to the Hospital Association with the stipulation that the land would revert to the trio if it was not used for hospital purposes.

The Sisters of Charity of the Incarnate Word, founders of St. Mary’s Infirmary, worked as nurses, druggists, housekeepers and administrators of the Temple hospital for fifty-eight years, until February 1949.  The Gulf, Colorado and Santa Fe Railway appointed a chief surgeon who was responsible for medical and surgical care at the Temple facility as well as for a system of line physicians consisting of one physician for every fifteen to twenty miles of the railroad.  The hospital’s first frame building housed twenty beds and the sisters’ quarters. A $90,000 four-story brick hospital, completed in December 1908, was designed by Sanguinet and Staats, Fort Worth architects, who also designed the 1915 north wing.  The south wing, designed by Wyatt C. Hedrick of Fort Worth, opened in 1925.

The architectural firm Sanguinet and Staats was founded in 1903 by Marshall R. Sanguinet and Carl G. Staats.  Sanguinet, who was twelve years older than Staats, moved to Fort Worth in 1883 and practiced architecture there with a variety of partners until the turn of the century.  Staats, a native New Yorker, moved to Texas in 1891 and worked for noted San Antonio architect James Riely Gordon until 1898, when he was hired by Sanguinet as a draftsman.  Sanguinet and Staats headquartered in Fort Worth and rapidly developed one of the state’s largest architectural practices; they produced buildings of all types from factories and large hotels to churches and schools.  The firm is best known, however, for its contributions to the design of steel-framed skyscrapers.

The hospital’s first chief surgeon was C. H. Wilkinson, M.D., of Galveston, first curator of Galveston Medical College.  When he refused to move to Temple, railway officials hired as chief surgeon Arthur Carroll Scott of Gainesville, who began on October 1, 1892.  Scott hired several doctors as house physicians who lived at the hospital, including Raleigh R. White, Jr., in 1895.  When they formed a private medical partnership in December 1897, both were named chief surgeons by the Railway Association, equally splitting their salary.  Their partnership evolved into Scott and White Memorial Hospital.  Thus, only Scott and White physicians were granted privileges at the Santa Fe Hospital. Another noted physician at the Santa Fe Hospital was Claudia Potter, considered the first full-time anesthesiologist in Texas and the first woman anesthesiologist in the United States.  A board consisting of Santa Fe officials oversaw the hospital until 1947, when the board was revamped to include representatives from labor unions.  The Santa Fe Hospital remained exclusively a railroad hospital until July 1966, when it was reorganized as Santa Fe Memorial Hospital, open to the community and granting privileges to physicians outside of Scott and White.  The hospital continued to treat railroad employees. The building also underwent extensive renovation between 1969 and 1972.  On July 5, 1983, Santa Fe Memorial Hospital and Scott and White Memorial Hospital merged, and the facility was renamed Scott and White Santa Fe Center.  The Santa Fe Center provides general and specialized medical care.  It also houses a medical research center operated jointly by Scott and White and the Texas A&M University Health Science Center College of Medicine. 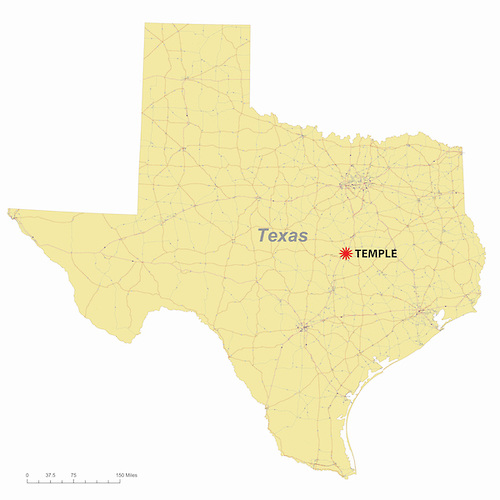