Wharton, the county seat of Wharton County, is on the east bank of the lower Colorado River, forty-five miles from the Gulf of Mexico.  It was part of the Caney Run mail route established by the Republic of Texas in 1838.  The community was named after two leaders in the struggle for Texas independence, brothers John and William Wharton.  The plantation community was first settled in 1846 by some of Stephen F. Austin’s original colonists, and a post office was established in 1847.  The first lieutenant governor of Texas, Albert Horton, was an early settler.  Land for the courthouse square was donated by William Kincheloe and surveyed by Virgil Stewart and William J. E. Heard.  Early settlers came from Alabama, Kentucky, Virginia, Georgia, and Mississippi. Jewish immigrants, arriving as early as the 1850s, established additional businesses and began the Congregation Shearith Israel, the only synagogue in a three-county area.  Other settlers in the community included Swiss, German, Mexican, and Czech immigrants and descendants of plantation slaves.

Early crops included potatoes, cotton, corn, rice, and sugar cane, and commercial enterprises included cattle, molasses, and sugar.  At different times the community had a cotton oil mill, a sugar cane factory, gristmills, cotton gins, a milk-processing plant and dairy, an ice plant, and numerous other industries.  Oil and sulfur production in the outlying areas contribute to the town’s economy.   The population of Wharton was about 200 in the early 1880s.  The New York, Texas and Mexican Railway was the first railroad to arrive at Wharton in 1881, followed by the Gulf, Colorado and Santa Fe in 1899.  These two railroads brought a new influx of settlers, increasing the population to 1,689 in 1900 and 2,346 in 1920. In 1888 the first opera house opened.

The city was incorporated in 1902, when most of the structures were of wood construction.   A major fire that year destroyed a number of buildings, convincing businessmen and the city government to use brick construction with fire walls for all buildings within the city limits and to construct a water system with fire hydrants.  On February 21, 1903, the Deaton Grocery Co. (photo above) was organized.   A free library was established in 1902 by the New Century Club and adopted by the city in 1904.  In 1935 the majority of this library’s inventory was given to the Wharton Public School.  The first public park was dedicated in 1913, and the Wharton Chamber of Commerce organized in 1919.  The city experienced its greatest growth during the 1930s, increasing from 2,261 in 1930 to 4,386 in 1940. Wharton Little Theatre was organized in 1932, and Wharton County Junior College was established in 1946.  The town’s population reached 5,734 in 1960 and 7,881 in 1970 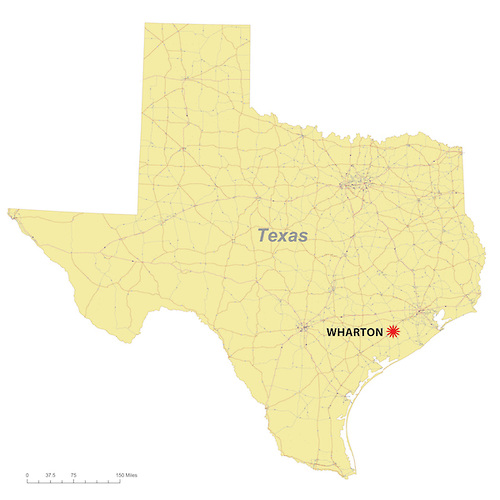