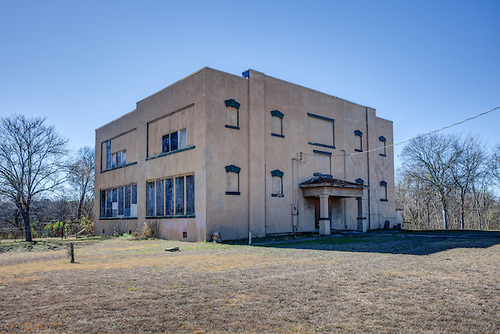 Lockhart, county seat of Caldwell County, was named for Byrd Lockhart, who in 1831 received the land that later became the Lockhart townsite as partial payment for his surveying work for the Mexican government.  During the 1830s settlement in the area was limited by the threat of Indian raids, but after the battle of Plum Creek in 1840, more settlers began to arrive.  By the mid-1840s, several families had made their home near Lockhart Springs, and when Caldwell County was established in 1848, the new town of Lockhart became the county seat.  Lockhart was incorporated in 1852 with a mayor-council government.  By that time the community was well established: Isabel Stewart began publishing a weekly newspaper in 1849 or 1850.  The Lockhart Academy, opened in 1850, was probably the first School in Caldwell County.  A Masonic lodge, built in 1850, provided meeting space for both school and church functions.

By 1855 at least five different churches had been organized.  An 1858 census of incorporated towns listed Lockhart with 423 residents.  In the late 1860s Lockhart became a starting point for the Chisholm Trail, and, as such, developed as a regional trading center in the early 1870s.  Beginning in 1874, however, the arrival of the Galveston, Harrisburg and San Antonio Railway in the southern part of the county and the subsequent establishment of Luling cut into business activity at Lockhart for several years.  Lockhart continued to grow, but did not recover its dominance of the county economy until after 1887, when the completion of the Lockhart-San Marcos section of the Missouri, Kansas and Texas line increased access to outside markets.  By 1890 Lockhart had electricity, a waterworks, streetcars, four schools, seven churches, and a national bank to serve its 1,233 residents.  Aiding its economic growth was the establishment of two more rail lines: in 1889 the San Antonio and Aransas Pass connected Lockhart and Shiner (by way of Luling), and in 1892 the Missouri, Kansas and Texas extended its track from Lockhart to Smithville.  In the 1890s and early 1900s Lockhart became an important regional center for processing cotton, with a cottonseed oil mill opening in 1893 and a compress in 1901.

The turn of the century also brought the establishment of the Dr. Eugene Clark Library (still extant and said to be the state’s oldest continuously operating city library) and Kreuz’s Market (still selling barbecue in the early 1990s).  The census of 1900 showed that the city population had nearly doubled in ten years, rising to 2,306.  The discovery of the Luling oilfield in 1920 again put Lockhart in economic second place in the county, but some Lockhart citizens were able to benefit from investments in the field.  Though it did not boom as Luling did, Lockhart grew steadily, its population rising from 3,731 in 1920 to 5,018 in the early 1940s.

In 1923, materials salvaged from Ross Institute, a former school for Lockhart’s Caucasian children, were used in 1923 to build the Lockhart Vocational High School (photo above) for African American students. The Rosenwald Foundation of Chicago, which funded many African American schools in the South in the early 20th century, provided the design and part of the construction cost. The school district and local African American citizens raised the majority of the funds for its completion.  The two-story brick and stucco schoolhouse contained six classrooms, a principal’s office and a large auditorium that also served as a social center for the neighborhood.  Prominent brick and stucco pilasters on the unadorned main facade rise above the parapet.  The east and west sides of the building have large banks of windows to maximize natural light.  The lower level has a centrally located portico with double doors that divide the principal facade.   R.A. Atkinson was the first principal of the school, which received state accreditation in 1926. At the time two years of high school coursework were offered here, and students could attend the twelfth grade in Luling. In 1946, the facility changed its name to G.W. Carver High School. It closed in 1964 due to school integration, but the building was later used by the Head Start program.

During World War II the Lockhart-to-Luling branch of the railroad was abandoned (in 1942) as part of the war effort, but as each city had another rail line, neither was irreparably damaged. The agricultural nature of the county economy was reflected in the major businesses in Lockhart at that time: cotton gins and compresses, a creamery, a poultry-dressing plant, a peanut shelling and processing plant, and livestock marketing and shipping facilities.

During the 1960s the population of Lockhart leveled off at slightly more than 6,000. In the early 1970s, residents became concerned that Lockhart might develop into a bedroom community for commuters to nearby Austin. In 1973, in an effort to avoid such a development, a group of Lockhart residents established the Lockhart Industrial Foundation, the function of which was to attract new businesses to Lockhart. Though in the early 1990s some Lockhart residents were commuting to jobs in Austin, the Foundation was fairly successful in attracting industries to Lockhart.  In 1978 the courthouse and several blocks of downtown Lockhart were listed in the National Register of Historic Places.

This entry was posted on August 6, 2022 by bronsond. It was filed under Central Texas and was tagged with abandoned, architecture, building, deterioration, history, Lockhart, ruins, school, Texas, Urbex.