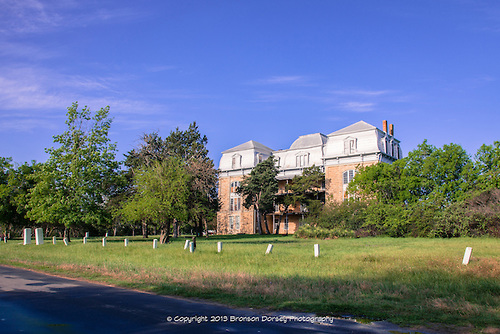 Tehuacana has a rich history of education dating to the period just prior to statehood.  Several institutes of higher education have called Tehuacana home, including the Tehuacana Academy pictured above.  It was a Cumberland Presbyterian college that opened its doors in 1852.  Dr. Franklin L. Yoakum (a physician turned teacher who later founded the Texas Academy of Science) and Daniel G, Molloy taught there.  The academy was a local enterprise, despite its connections to the Presbyterian Church, and neither Bible courses nor denominational views were taught.  Tehuacana Academy, as an institution, did not survive the Civil War.

A post office called Tewockony Springs was established at the current location of Tehuacana in 1847.  It was most likely named for the Tawakoni Indians, part of the Wichita group from central Kansas who lived in the area until the late 1840s.  When Tehuacana Academy opened in 1852, the community was known as Tehuacana Hills, though the post office continued to be called after the springs.  The post office was discontinued during the Civil War, but service resumed in 1869, at which time the name of the office was changed to Tehuacana.  That same year, John Boyd persuaded the Cumberland Presbyterian Church to make Tehuacana the site of Trinity University, which had been created by merging three other small Presbyterian schools that had also failed during the Civil War.

By the mid-1880s Tehuacana had three churches, two gristmills and cotton gins, and 500 residents.  It was incorporated in 1890 with a mayor-council form of city government. The census of 1900 reported 382 residents in Tehuacana.  Trinity University moved to Waxahachie in 1902, and the property was deeded to the Methodist Church, which opened Westminster College, a preparatory school for Methodist ministers, which had its origins in rural Collin County.  Westminster College remained in Tehuacana until 1950 when the property was sold to the Congregational Methodist Church, which opened another junior college there, the Westminster Junior College and Bible Institute.  It offered an associate of arts degree. The Bible Institute, a department of the college, offered a four-year curriculum leading to the degree of bachelor of religion.  In 1968–69 the college had fifteen faculty members and ninety-five students, but by 1970 the student body had decreased to sixty; Elmo McGuire was president. In 1971 thirty-five students and seven teachers of the Westminster Junior College and Bible Institute moved from Tehuacana to a forty-acre campus at Florence, Mississippi, a location called the “geographical center” of the Congregational Methodist Church.

In 1903 the Trinity and Brazos Valley Railway completed its track between Cleburne and Mexia, passing through Tehuacana. The population increased to 425 by 1910 and to 615 by the mid-1920s. Tehuacana lost its rail service in 1942, when the track between Hubbard and Mexia was abandoned as part of the war effort.  Westminster College became part of Southwestern University in 1942 but was closed in 1950; the campus reopened in 1953 as Westminster Junior College and Bible Institute. The population of Tehuacana fell to 412 in the early 1930s and continued to decline through the early 1980s, reaching a low of 265 in 1982. Moderate growth in the 1980s brought the population to 322 by 1990. In 2000 the population was 307.  Tehuacana is at the intersection of State Highway 171 and Farm Road 638, six miles northwest of Mexia in northeastern Limestone County. 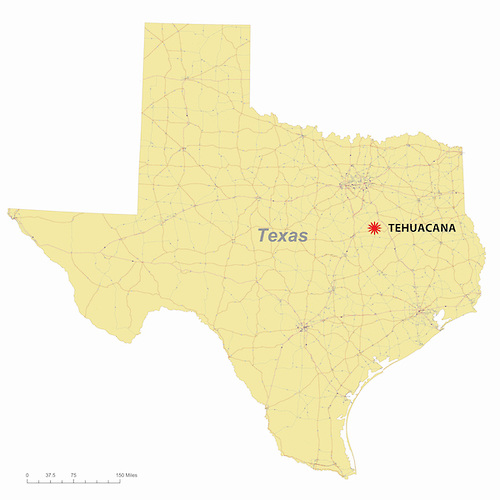