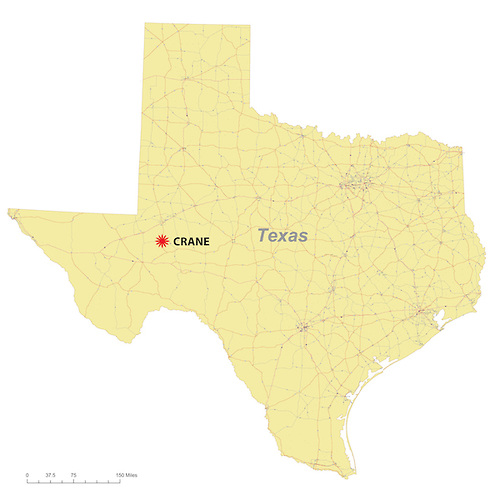 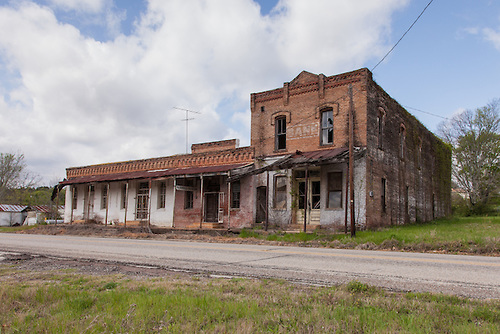 Murdock McDonald, born in North Carolina, had come to East Texas from Georgia in the 1830s.  Jackson Jones (Jack) Davis was born in South Carolina and came to Texas with his wife Elizabeth around 1845.  Both men bought property northeast of what is now Palestine and settled with their families.  When the International Railroad announced in 1871 that it would build a railroad through East Texas to Palestine, McDonald and Davis were determined that the railroad be located close to their property.  After tough negotiations, the two men donated parts of their properties to the railroad on the condition that that the railway be built by December, 1873.  While the railroad was being built McDonald and Davis began laying out a townsite.

On December 23, 1872, a post office with the name Nechesville was opened (the community changed its name to Neches in 1892).  The McDonald Hotel was built in 1873 and by 1884 the community had a Masonic Lodge, two steam sawmills, a gristmill, two churches, a general store, a drug store (established by T.R. Dunn), two saloons (one of which owned by Murdock McDonald), a school, and an estimated population of 100.  The two-story structure in the photo above was the W. J. Foscue General Merchandise building erected in 1890.  The ground floor of this building later became the home of Guaranty State Bank with the second floor home to a variety of businesses.  When it was established in 1897, J. B. McDonald & Son, located in the middle of the three attached buildings, claimed to carry everything one could need “From the Cradle to the Grave.”  Murdoch McDonald also acted as justice of the peace, advertised as a supplier of “meats and justice.”  In 1896 a monthly newspaper, the Southern Poultry Journal, was published in the town.  Another newspaper, the Neches Tribune, was published in the community before the 1930s.  Neches had 261 inhabitants in 1900 and an estimated 400 in the 1920s and 1930s.  It was a prosperous community with twenty-four businesses and an estimated 900 inhabitants in 1939. It began to decline in the 1940s.

Throughout its history, Neches was a shipping point for the timber mills and produce-growers in the area.  In the 1920s, the East Texas oil boom, particularly the nearby Boggy Creek Woodbine and Neches Woodbine fields, resulted in prosperity for Neches and nearby towns.

Education was a priority for the citizens of Neches.  The Stovall Academy had been built three miles south of Neches 1866 by the Rev. Mr. Stovall.  It was later disassembled and moved to town and renamed Neches Normal Institute operating as a private school.  New school buildings were erected in 1882 and 1913 to serve local students.  In 1928 the Neches school, along with schools in Mt. Vernon, Hollywood, and Coperas Grove (now Todd City) consolidated into one school located in Neches.

Neches is at the intersection of U.S. Highway 79 and Farm roads 321 and 2574, on the Union Pacific Railroad nine miles northeast of Palestine and four miles from the Neches River in eastern Anderson County. 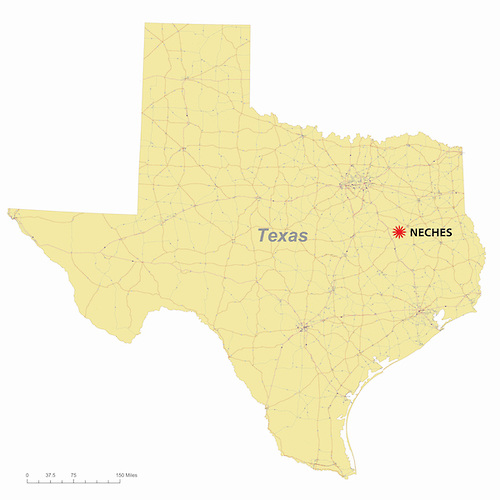 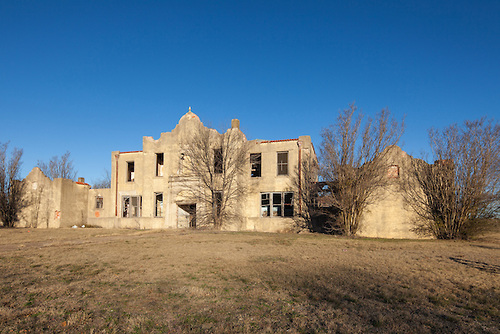 When I first learned about the school building in Mosheim, there was speculation that it was soon to be torn down.  That resulted a hastily-planned road trip to the area and a sigh of relief that the building was still standing.  The old school building was probably not the original school in Mosheim, but was likely built in the 1910s or 1920s.  Exterior walls were constructed of structural clay tile and brick, then covered with stucco.  Floors, walls, and roofs were framed with dimensional lumber.  The building’s mission-style design is unique for a country school of that period.  It appears that each of the side wings of the building held three classrooms.  The center two-story section of the building contained classrooms on both floors.  Given the small population of Mosheim, the school undoubtedly served students from nearby farms in addition to those from the town.

Mosheim, formerly Live Oak, is at the junction of Farm roads 217 and 215, 7½ miles west of Valley Mills and twenty-three miles northwest of Waco in southwestern Bosque County. The first settler in the area was probably Jonathan Dansby, who arrived in the mid-1850s from Alabama.  Dansby was a Private in the 31st Regiment, Texas Cavalry during the Civil War.  In 1855, he married Sarah Ann Farris, who had migrated with her family from Illinois.  Jeff Howard built the first store in 1886 and established a post office in it the next year; at this time the town received the name Mosheim from the United States postal authorities.

Bosque County, located in North Central Texas, is farming and ranching country.  The county was largely settled by Norwegian immigrants during the 1850s, encouraged by the state of Texas’ offer of 320 acres to each family.  Many descendants of these Norwegian settlers still live in the county today.  By 1896 Mosheim had an estimated population of fifty, a school, a Methodist church, and several businesses.  The number of residents reached a peak of 200 until the late 1960s and then remained stable at seventy-five from the 1970s through 1990. 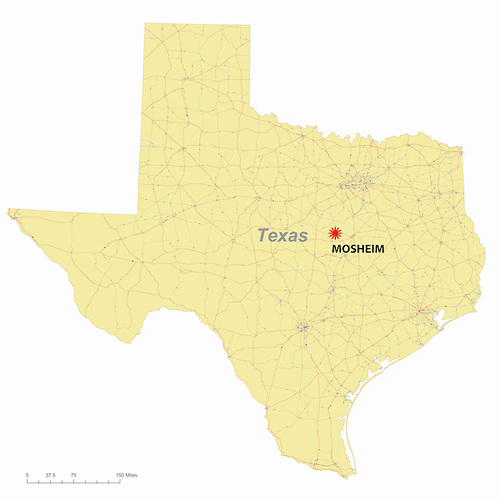