Originally established in the early 1880s as a cotton and cattle shipping point on the Texas and Pacific Railway, Loraine saw little development in its early years. A post office opened there in 1890, and a school was built in 1893.  A hotel, a grocery, and a hardware store reportedly operated at the site before 1905.  In that year Parson Crandall bought the townsite land from the railroad and platted the town.

Growth was rapid after the town was platted.  A weekly newspaper began publication there in 1906, and the community was incorporated by 1910.  In 1914, when its population was an estimated 800, Loraine supported more than forty retail and service businesses, including a bank, a commercial club, and an electric utility company.  During the 1920s Loraine had an aldermanic form of government, operated its own public water system, and provided both high school and grade school facilities to local students.  In the 1930s cotton ginning grew in importance, and the town was recognized as a shipping, marketing, and ginning center.

Population estimates for Loraine ranged between 700 and 750 during this period.  A hospital was opened at the community in 1938.  During the 1940s the town was known for its cheese factory, for its annual dairy show, and as the headquarters for the Loraine Cooperative Association, which handled the milk supply for several surrounding counties.  The number of businesses at Loraine varied from an estimated high of fifty-five in 1940 to a low of thirty-four in 1947.  Population estimates remained at around 700 in the 1940s but rose to more than 1,000 during the 1950s, though the number of businesses began a steady decline.

Loraine is on U.S. Highway 20/80, Farm Road 644, and the Missouri Pacific line, ten miles east of Colorado City and fifty-eight miles west of Abilene in northeastern Mitchell County.  Three conflicting stories concerning the town’s name exist: the first says that Loraine was named for a railroad official’s wife, the second that the community was named for the daughter or wife (possibly Loraine Crandall) of a local landowner, and the third that the town was named for the French region of Lorraine. 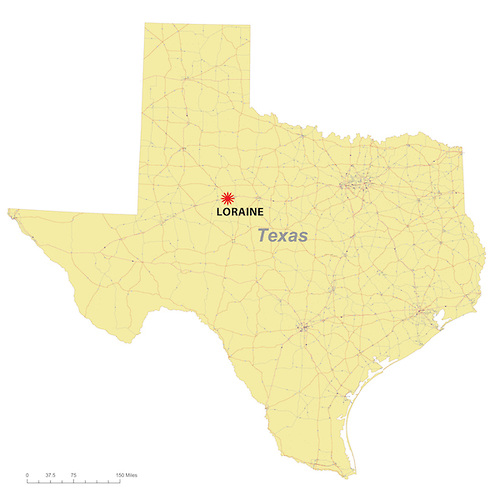