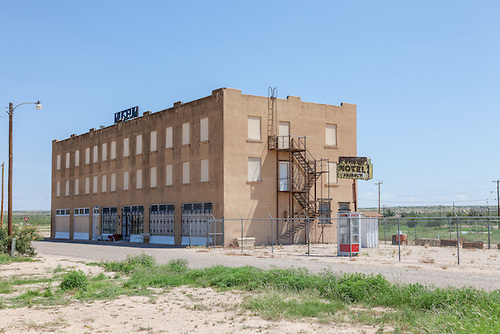 Rankin, the county seat of Upton County, is in the southeast part of the county at the junction of U.S. Highway 67 and State Highway 349, ten miles west of the Reagan county line.  It is in the heart of the Permian Basin and is the oldest town in the county, having been established in 1911.  The town, named for early day rancher F. E. Rankin, was founded after Upland, then the county seat and eleven miles north, was missed when the Kansas City, Mexico and Orient Railway was routed south instead of following the Butterfield Overland Mail route along Centralia Draw to the north.  Rankin received a post office in 1912.  Most Upland homes and businesses were moved to the new railroad town of Rankin, but it was not designated county seat until March 20, 1921. Rankin remained a small ranching community until the mid-1920s, when oil was discovered in the surrounding area.  Santa Rita, McCamey and Yates fields opened up and the population soared.  It was estimated at 1,500 in 1928.  During this boom period, electric, telephone, and water systems were enlarged.  Two forty-six room hotels, an $80,000 brick school building, a courthouse, and a two-story office building were erected.  A bank was established, and a weekly newspaper, the Upton County Journal, started publication. The city was incorporated in 1928.

The year before the city was incorporated, rancher/oilman Ira Yates (a newly minted millionaire) built a three-story hotel in Rankin out of sand-colored brick.  The hotel had 46 rooms, one of which was kept by Yates for frequent games of poker.  There were no en suite bathrooms at the Yates.  Guests had to walk down the hall to a shared facility.  Due to its construction, the Yates Hotel was the only fireproof hotel at the time between Fort Worth and El Paso.  It even housed a restaurant and a barber shop.  One can imagine the business deals made and the hands of poker played at the Yates during its heyday.

When no oil was discovered close to Rankin, people left and the boom was over.  By 1931 the population had dropped to 935.  The Great Depression took its toll, and in 1940 the population had dropped to 672.  In the late 1940s the Benedum field north of town came in, and the economy was again on the upswing.  This boom period brought a hospital, a community building, three new school buildings, a country club, and a library.  The population doubled by the 1950s to 1,132.  Rankin remained stable with a total of 1,121 residents and thirty listed businesses in 1970 and 1,278 residents and twenty-four businesses in 1980.  In the 1990s the city had six churches, four parks, a nine-hole golf course, a swimming pool, and a roping arena, and the Yates Hotel housed the Rankin Museum. The area had pecan orchards and irrigated farms, but oil, sheep, and cattle continued to be the base of the economy.

This entry was posted on December 30, 2021 by bronsond. It was filed under West Texas and was tagged with abandoned, architecture, building, Commercial, deterioration, history, Hotel, Ira Yates, Rankin, ruins, Texas, Urbex, Yates Hotel.