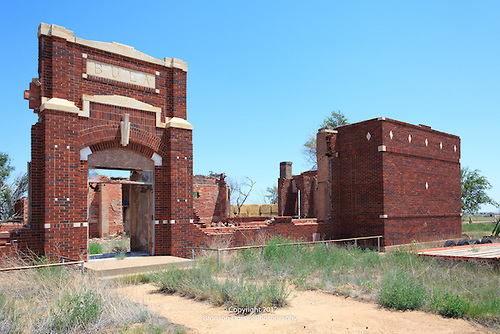 Bula, on Farm Road 54 in southeastern Bailey County, was established in 1924 and originally named Newsome, for the Newsome Ranch owned by W.B. Newsome, a prominent Dallas banker and director of the Dallas District of the Federal Reserve Bank, and his son Tom, a Dallas businessman.

After the town was named Newsome, the town was notified by the US Post Office Department that there was already another post office by that name.  The town was renamed Bula in 1925, in honor of either Bula Maude Oakes, daughter of Methodist preacher Roma A. Oakes, or Bula Thorn, wife of William H. Thorn, the first postmaster – the latter being the more logical reason.

Bailey County was carved out of Bexar County in 1876, but settlement didn’t come quickly as much of the County land was held by the XIT Ranch, the Newsome Ranch, and others.  The breakup of the XIT started in 1901.  The Newsomes followed suit and subdivided their ranch into farms of 177.7 acres and sold to farmers in 1924–25.  Discovery of ground water at depths of only twenty to forty feet made the land, once only suitable for ranching, much more suitable for wheat, corn and forage crops.  However, it was the rapid expansion of cotton farming that was responsible for development of Bailey County and Bula.  The first cotton grown in Bailey County was shipped to Plainview for ginning.  A cotton gin was built in Bula in 1929.

In 1925 Bula also opened a school to serve the town and surrounding farms.  Its school later moved to a site about five miles southwest of the community.  The school building (pictured above), most likely built as a WPA project, was closed in 1975.  The vacated building burned sometime after its closure.

This entry was posted on October 28, 2021 by bronsond. It was filed under West Texas and was tagged with abandoned, architecture, building, Bula, deterioration, ghost town, history, ruins, school, Texas.