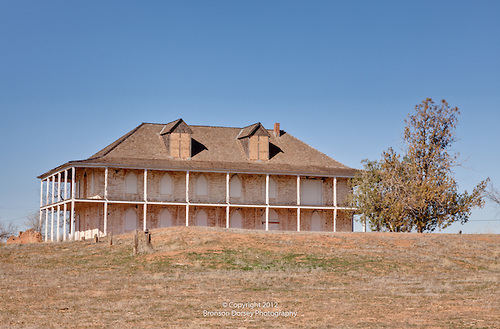 Finding an abandoned Carmelite monastery on the dusty plains of West Texas was a surprise to me.  However, evidence of the impact of German settlers was not.  Fanning out from their port of entry, Galveston, German immigrants played a large role in the settlement of Texas and, as Texans, our collective culture bears the imprint of the culture and religious faith of those German settlers.

Stanton, the county seat of Martin County, is on Interstate Highway 20 100 miles south of Lubbock in the southeastern part of the county.  In 1881 the Texas and Pacific Railway built a two-story section house, a pump, and a water tank at a small settlement in Martin County then known as Grelton.  While searching for a place to establish a German Catholic colony, John Jacob Konz of Anderson County, Kansas, met Charles Froesee, who surveyed the land around Grelton and marked off town lots.  Konz returned to Kansas and organized a settlement party, and on August 15, 1881, five men, including Konz’s son Adam Konz and Father Christian D. (Anastasius) Peters, arrived in Grelton.  In October 1881 a load of lumber arrived, and the first buildings and homes were built.  The next year Konz built a general store.  The elder Konz led more Kansas settlers who arrived in 1882, and two of Father Peters’s cousins were part of a group which came from Pocahontas, Arkansas.

In 1883, the year a post office was granted and J. B. Konz named postmaster, another settlement party arrived.  Father Peters and his brother Boniface, also a priest, wrote promotional bulletins and even traveled to Germany to publicize the colony.  In 1885 Father Anastasius and others organized a sale of town lots.  Citizens constructed the first permanent courthouse and petitioned the railroad to change the name of the town to Marienfeld (German for “Field of Mary”). There being no objection, the railroad agreed.  By 1885 Marienfeld had several businesses including a hotel, a wagon yard, several stores, a courthouse, a jail, a school, the Catholic complex, and railroad operations. Within three months of their arrival Konz and Father Anastasius had built the first Catholic Church in West Texas.  A year later they built a two-story adobe monastery for the Carmelite order, of which fathers Anastasius and Boniface were members, which also housed the first school in West Texas.  In 1894 a group of nuns of the Sisters of Mercy arrived and opened the Convent and Academy of Our Lady of Mercy.  For many years the school was the only Catholic academy between Fort Worth and El Paso, attracted students from all of West Texas.  The convent and monastery also served as a base for mission activities.  The nuns opened schools and hospitals in Big Spring, Pecos, Menard, Fort Stockton, and Slaton.

In order to ensure the survival of Marienfeld, Father Anastasius was eager to put the town on a firm economic footing.  Despite the fact that ranching had previously been the primary form of land use in the area, he believed that the county’s future lay with agriculture.  The T&P sold land for $1.50 to $2.00 an acre, most of which was used for farming.  Shortly after building the station house, the railroad had established a twenty-acre demonstration farm and planted wheat, oats, barley, and rye.  Father Anastasius followed the railroad’s lead, and in 1884 wheat from Marienfeld won the gold medal at the New Orleans World Exposition.  Their early successes concealed the fact that the German settlers knew little about the West Texas climate.  A drought in 1886 and 1887 took them completely by surprise; this and the winter blizzards of 1886 almost destroyed the colony. Many of the settlers moved to Big Spring, and immigration came to a standstill.  For almost six years no crops were planted.  Still persistent, Father Anastasius founded the Marienfeld Fruit Growing, Gardening, and Irrigation Company in 1888.  His persistence could not, however, change the West Texas climate, and the company’s charter was allowed to lapse in 1895.  Though most of those who moved away during the drought were Catholic, most who arrived afterwards were Protestant, so that by the 1890s Catholics were in the minority.

In 1890 the town was renamed Stanton, for Edwin McMasters Stanton, a Supreme Court justice and secretary of war under President Lincoln.  Public school students chose the name.  The next few years saw the organization of several Protestant congregations: the Baptist in 1898, the Church of Christ in 1904, and the Methodist in 1905.  In 1910 the Santa Fe Railroad started construction of a branch line, never completed, from Stanton to Lamesa, and Stanton residents built a new $40,000 courthouse.  The town was incorporated in 1925, and S. C. (Tink) Houston became the first mayor.  That same year the Sisters of Mercy in Stanton merged with the Sisters of Mercy of the Diocese of Oklahoma, and most of the nuns left Stanton.  Formal education in Stanton began with the opening of the first Catholic school in 1882. The first public school opened two years later with H. V. Moultan as teacher.  In 1909 a two-story red brick schoolhouse replaced an older two-room building.  The first high school opened in 1926.  White, Hispanic, and black students attended separate schools until 1949; black students were bused to Midland if they wished to attend high school.

Like many other West Texas towns, Stanton vied to become home of Texas Technological College, founded in the 1920s, but lost out to Lubbock.  Enrollment at the Catholic academy had already fallen sharply when in 1938 a tornado severely damaged the buildings and the school closed. Stanton’s first library was established by the Stanton Reading Club in 1914.  The first newspaper was the Marienfeld News, published by A. Rawlins from 1887 until the early 1890s.  The Stanton Courier was first issued in 1904 with J. LeRoy Lancaster as editor; a little over a year later it was replaced by the Stanton Reporter, which was in publication until 1984, when it became the Martin County News.  Ranching and farming, primarily cotton farming, remained the dominant economic activities in Stanton until 1951, when the Stanton oilfield went into production.  In the wake of the oil boom Stanton acquired a new jail and the courthouse was remodeled.  Two major oil companies were headquartered in Stanton. Oil and gas production, together with farming and ranching, formed the base of the economy in the 1980s.  During the 1950s Stanton acquired a cotton compress and the $205,000Martin County Memorial Hospital.  A flood in September 1950 caused more than $50,000 damage in the town.  In 1977 the T&P discontinued service to Stanton, but two bus lines and a municipal airport continued to serve the town. 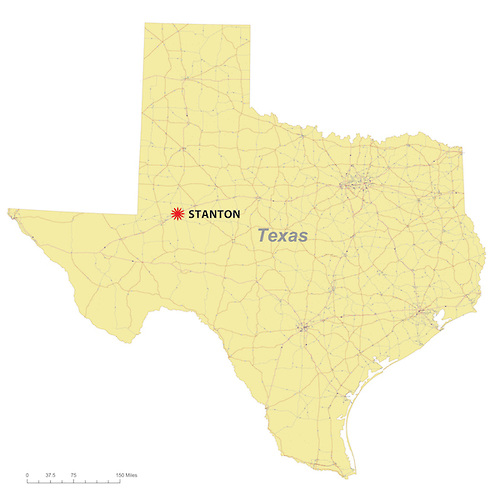 In its heyday sixty years ago in the late 1940s, Draw, Texas was a bustling, if not exactly thriving, little village of perhaps 200 people.  It boasted two general stores, a blacksmith shop, one or two cafes (depending on the season of the year), a cotton gin, a small lumberyard, a Methodist church, a large six-room redbrick schoolhouse with an auditorium/gymnasium, and at least a dozen proper residential buildings, along with various lesser dwellings — railroad boxcars and a tin shanty or two — that housed gin workers and itinerants.  Both general stores also doubled as gas stations and carried a stock of hardware goods, livestock feed, and small farm implements.  To one was attached an ice house, for the summertime storage (but not manufacture) of block ice, which was transported from the ice plant in Tahoka.  Later a second gin was built, adjacent to the first and operated by the same company, and in the fall ginning sometimes went on twenty-four hours a day for several months, from September until December.  In those years of bumper cotton crops in the late 1940s, one or another itinerant tent movie operations appeared at the beginning of the harvest season and set up on some lot near the gin, showing old cowboy movies and catering to both locals and the hordes of Mexican-American families who flocked into the community to pick cotton each fall.  Today, Draw is a ghost town. The gins and all the other businesses (and many houses) are gone; perhaps a dozen people live there, mostly in trailers scattered among the ruins.

The earliest evidence of Draw’s existence comes not from contemporaneous records but from the memories of those who, fifty years later, contributed to a history of the Methodist Church there.  As early as 1901, there existed a small building used as a school house and located some one and a half miles northwest of the present location of Draw.  About 1904, this building was moved to a site three and a half miles northeast of present Draw and became known as “Moore’s Draw School House,” apparently taking its name from a geographical feature and the otherwise unknown settler named Moore (possibly spelled “Mooar”) who was identified with it.  How “Moore’s Draw” was shortened and moved to its present location is unknown; one can only assume that soon afterwards there were the stirrings of some sort of commercial activity at the crossroads of what are now the small highways designated FM (Farm-to-Market) 213 and 1054, and those who used “Moore’s Draw School House” as both school and church decided that was the place to be.  Obviously, the shorter version of the name followed along. 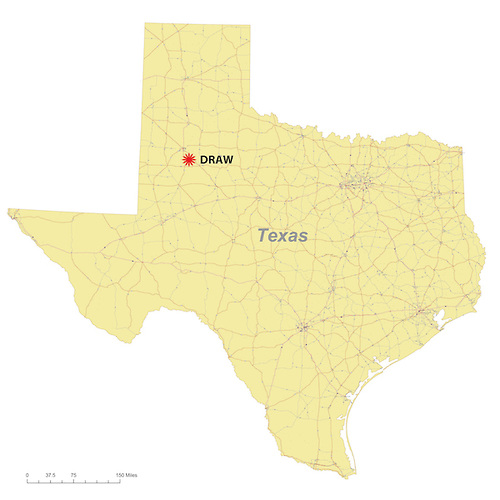