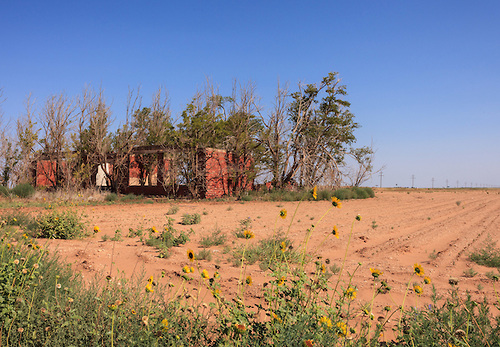 Sitting at the intersection of Farm Roads 179 and 213 in southwestern Lynn County, are the remains of the last school building built in the community of New Moore.  The roof is gone, but enough remains of the structural clay tile walls to discern four classrooms.  Fertile fields surround the ruins, so it’s encouraging that landowners have preserved this remnant of New Moore.

In 1892, Samuel F. Singleton and Marion Virgil “Pap” Brownfield filed on 16 sections of land along the present-day Lynn and Terry County lines for future cattle, railroad and township purposes.  In 1896, Singleton sent his son, Willie and a cook to the area to set up camp.  As with many business propositions, the men had different ideas about the use of the land.  The men decided to part ways and divided the land. Singleton ended up with the Lynn County territory and Brownfield, the Terry County land.

Singleton then purchased the nearby Slash L Ranch, consisting of 30 sections, in 1898.  He put more than 5,000 head of cattle on the land.  However, the problem of drought and poor watering holes forced the rancher to spend $19,000 to dig wells.  The most successful and least tainted water came from present day New Moore.  After Singleton’s death in 1922, the family decided to sell the ranch. W.McCarty Moore from Dallas purchased approximately 17,000 acres and commissioned G.O. Newman of Newman Bros. Land Development Co. in Fort Worth to market his purchase.  To prove the worth of the land the company broke and planted 3,000 acres in cotton in 1924.  Within the year, the company sold inexpensive land of 13,240 acres to about 50 farmers who came largely from the Nolan County area.

As families with the names of Rogers, Bevel, Crutcher, Strasner, Light, Pharr, Parker, Fails, and Isreal came to western Lynn County, the company dubbed the settled area New Moore in honor of Newman and Moore.  In 1924, Moore built the Slash L School on the west side of the land that later came to be known as the Marshall place, about five miles southwest of New Moore.  The school was to take care of the many children of the new farmers.  The school building was a crude, one-room structure, without water or electricity.  It had many windows to let in light, according to Hoskins’ New Moore, Texas account.

“Mesquite wood was used in the stove to warm the building.  The room held from five to seven grades with one teacher for all students.  Mrs. Ella Walker from Wolfe City was an early teacher there.  Moore personally paid her salary, as well as the salaries of other teachers out of his own pocket as long as the school existed,” according to Hoskins.

Another school was authorized by Lynn County Commissioners later in 1924, a wooden structure built at New Moore, across from the Frank Rogers home, which was the old Singleton Ranch headquarters.  Both the Slash L School and the New Moore School operated until they were consolidated in 1928.

In the fall of 1928, another school was started one mile north of New Moore.  In 1929, the modern four-room brick building was opened and the two other schools were closed and consolidated into the new larger school.  Unfortunately this was also the first year of the depression so families began to move to towns to seek employment. The population continued to dwindle in subsequent years.  The New Moore School closed in 1953.  The last business to close in New Moore was the cotton gin, which ginned its last bale in 1986. 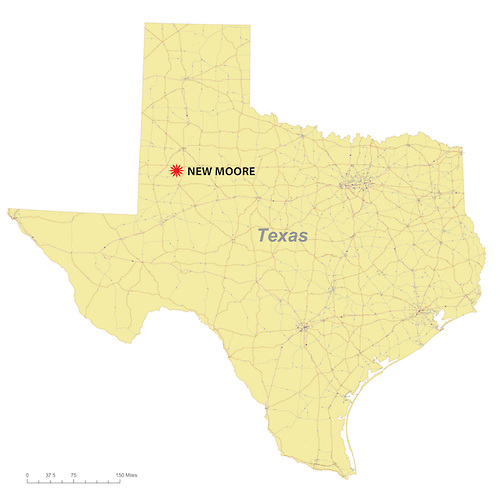 This entry was posted on July 1, 2022 by bronsond. It was filed under West Texas and was tagged with abandoned, architecture, building, deterioration, history, New Moore, ruins, school, Texas.