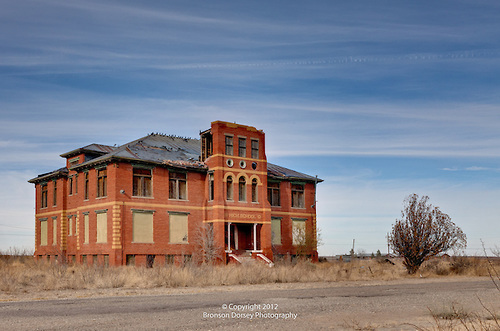 Despite its name, an Indian word meaning “flowing water”, Toyah looked pretty arid when I visited.  Perhaps nearby artesian wells  or water flowing in Billingslea Draw inspired the name.  Toyah is the oldest townsite in Reeves County, founded as a trading post for the large ranches in that area.  In the early 1880s, before the railroad reached Reeves County, W. T. Youngblood and his family moved to the area in a covered wagon with a stock of general merchandise. Youngblood began his business by visiting each ranch as a peddler.  At the time he was also building a one-room store of adobe.

In 1881 the first train arrived in Toyah, and that year a post office was established.  By October 20, 1881, Toyah was described as a town of tents, saloons, and restaurants. At the end of the year the Overland Transportation Company announced stagecoach service from Toyah to Fort Stockton and Fort Davis-six times each way weekly.  By 1886 the community also included the A. M. Fields Hotel.  The first public school in Toyah was established in 1894 with one teacher and five grades in a one-room building.  By the 1899–1900 term the school had forty-two students and two teachers; the next year the student population increased to fifty-five, though there was only one teacher.

The abandoned school building pictured above was built in 1912 and served as both elementary and high school until the late 1940s, when it was replaced.  According to former students, the second floor was removed in the 1960s and the building used as the school’s gym.  Although there aren’t any newer school buildings nearby.  The Toyah school district was later consolidated with the Pecos school district.

Two famous people were forced to stop in Toyah in the late 1920s or early 1930s, although they were not there at the same time.  World-renowned pianist Ignacy Paderewski and his family were traveling by rail when their train was forced to stop in Toyah while debris from a winter storm was cleared from the tracks ahead.  To their good fortune, their railroad car stopped across the street from the stationmaster’s house.  The stationmaster’s wife took the Paderewski’s servings of her English Plum Pudding.  Thus began a lifelong friendship between the two couples.  In September, 1928, Amelia Earhart was forced to land her plane near Toyah when it developed engine trouble during a cross-country flight.

Toyah reported a population of 771 in 1910, and the town became a major cattle-shipping point on the railroad.  By 1914 the population of Toyah had increased to 1,062, and it remained above 1,000 until the Great Depression hit in 1929.  In 1931 Toyah reported a population of 553, with seventeen businesses, including a bank.  At one time or another in its history, Toyah had four churches, four stores, two banks, two hotels, two lumberyards, and a drugstore.  Toyah was incorporated in 1933, and the number of businesses rose to twenty. 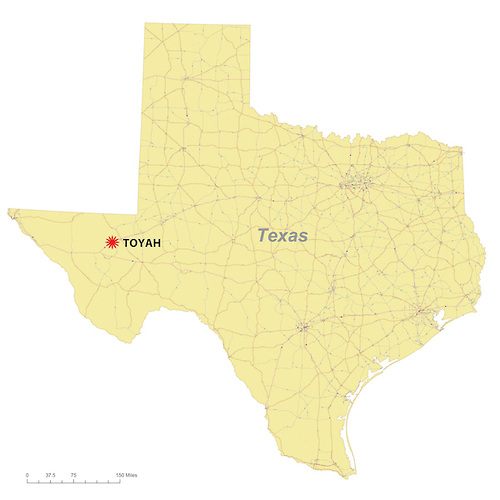 This entry was posted on February 5, 2022 by bronsond. It was filed under West Texas and was tagged with abandoned, building, history, ruins, school, Texas, Toyah.