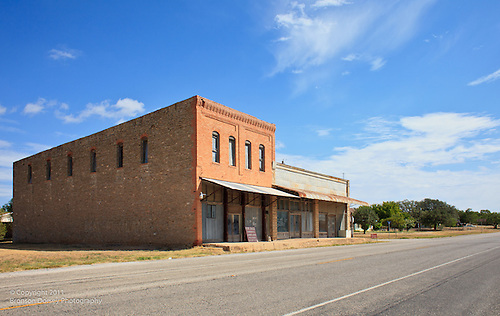 There are few commercial buildings left in what was the thriving rural community of Rochelle in the early 1900s.  A few vacant storefronts are all that remain to remind us of the role this town played in the growth of  McColloch County.  If you have a good imagination, you can picture a horse-drawn wagon or even a Model T Ford parked in front of these buildings.

Located northeast of Brady on US Hwy. 190, the town was alternately known as Crewville and Crothers in its early days.  The name Rochelle, suggested by a French settler from La Rochelle, France, was accepted by the postal service in 1879.  Rochelle was originally populated by ranchers and farmers and that largely remains true today.  The arrival of the Fort Worth and Rio Grande Railroad in 1903, conceived by Fort Worth business leaders with visions of a railroad linking New York, Fort Worth, and the West Coast and backed by the Vanderbilt railroad syndicate, helped Rochelle grow to a population of 700 by 1914.  The town boasted of three churches, three general stores, two cotton gins, a newspaper, a bank, and a hotel.  The town remained stable through the 1930s and 40s.  However, when the railroad abandoned its tracks in the late 50s, the town declined.

Education has always been an important part of the community of Rochelle; starting with a one-room schoolhouse in 1886.  Over the years, nearby towns (including Placid, Claxton, Corn Creek, Cowboy, Fairview, East Sweden, Mercury, and Round Mountain) consolidated their schools with Rochelle.  Today, the Rochelle Independent School District serves a large part of rural McColloch County.